When the Modern Warfare brand re-launched itself in 2019 everyone was pleasantly surprised at how fantastic Infinity Ward’s newest entry in the Call of Duty franchise was. With the addition of now-mainstay modes like the battle royal mode Warzone, MWI became one of the most loved Call of Duty games ever. With Modern Warfare II the bar is set much higher, and with Warzone 2.0 weeks away can the game stand on its own based on the campaign and multiplayer alone? Short answer, yes.

The campaign mode in Modern Warfare II picks up somewhat where the Modern Warfare I campaign left off. You are playing as Soap McTavish and trekking along on missions with Ghost, who is nearly the main character this time, and Captain Price. Others making major appearances are Gaz, Kate Laswell with the CIA, Graves with Shadow Company, and your south-of-the-border team Los Vaqueros run by Alejandro Vargas.

I won’t spoil the campaign here, but the story follows you, the team, and the CIA as you track down Makarov and explore his involvement with the Las Almas Cartel around the globe. I’ve seen other reviews noting disappointment in the campaign, but I quite enjoyed it. The story moves along well and the missions felt different from your standard run and gun. There were more stealth missions (with options to go loud) and even a mission that slightly mirrored the Hitman games. The downsides I hit were mainly the enemy AI being really dumb, and some crashing on PC. I also would have liked a slightly different end-boss encounter. Overall, if you haven’t played a Call of Duty campaign in a while this is a great one to dive into.

Multiplayer in Modern Warfare II is once again the star of the show (at least until Warzone 2.0 comes out). It brings back all the modes you are familiar with and even adds back a third-person mode, which actually works much better than I expected. The main difference this year that vets may notice is the movement. The movement is a bit slower and more methodic, even with things like dolphin dive back in the game. I think it all works extremely well.

The weapon selection is also solid, although the convoluted and messy user interface makes it a chore to figure out what unlocks you have, what guns, and what skins work where. The entire UI needs to be redesigned, in my opinion. The first season has yet to kick off, so there is no Battle Pass to go through, but there are the standard unlocks for weapons, devices, etc. One of my favorite new items has to be the drill “grenade.” Throw it on a wall (or any surface) and it explodes on the other side. Great for hold-the-point style missions!

Overall Modern Warfare II is a great next step in the revived Modern Warfare franchise, and clearly the best in the Call of Duty line at this point. If you weren’t big into Call of Duty in the past, I don’t think this does enough new to bring you in, but for veteran players, this is a return to form after last year’s weak Call of Duty Vanguard game. I’ll be curious to see how Warzone 2.0 and the first season Battle Pass are, and what the improvement situation will be for bugs, new maps, etc. over the coming months. 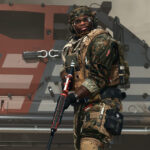