HB Studios, under the umbrella of 2K Sports, is back after taking a couple of years off, bringing us their latest PGA Tour-licensed game, PGA Tour 2K23. Let’s dive in and see if it’s a worthy upgrade.

PGA Tour 2K23 brings back many of the same modes such as Casual, MyCareer, Multiplayer, and Course Designer, which includes many new objects to help you build your perfect custom course or to recreate your local club. This year’s version includes a new partnership with Top Golf, bringing a virtualized version of Vegas Top Golf into the game. For those unfamiliar, Top Golf lets you compete against others but hitting 10 balls into various colored circles for points. The closer to the center of the targeted circle, the more points you receive. It’s a fun mode to play with a few of your friends.

One new feature in PGA Tour 2K23 is the idea of player archetypes for MyPlayer. Golfer archetypes are essentially different styles of play. However, there are strengths and weaknesses for each of the five archetypes. For example, the Woodsman archetype can help with those recovery shots but its weakness is putting. The Powerhouse archetype gives you a carry-distance boost, but the swing difficulty increases. You can quickly switch your archetype in the MyPlayer section, letting you change your play style based on the course you are playing.

There are now two swing mechanics available in PGA Tour 2K23. You can use the familiar analog swing utilizing the controller stick or the new-to-the-series, 3-click mechanic. 2K decided to go with a different route for the 3-click swing method. Instead of pressing the button to start, again at the top of the swing, and again at the bottom, you now hold the button down to start your swing and apply power. After releasing the button, you press the button at the top of the swing circle and again at the bottom. It took me a little time to find my rhythm but I’ve switched to this as my swing mechanic.

PGA Tour 2K23 as you might expect with the license includes several well-known PGA and LPGA Tour players such as Lexi Thompson, Jon Rahm, Rickie Fowler, and of course cover athlete Tiger Woods. Additionally, NBA greats like Michael Jordan and Stephen Curry are represented in the game. All players are playable this year, unlike in previous years.

Golf balls in PGA Tour 2K23 have two aspects to them, their appearance and their type. Using a ball from Ping, Wilson or Titleist has no bearing on your game, it’s simply cosmetic. However, the ball type used does affect your golf game. Ball types include Common, Uncommon, Rare, Epic, and Legendary rarity and are purchased in sleeves of 3, 6, or 12. While playing, the spin, flight, bounce, and roll of the ball are affected based on the rarity of the ball used. Certain sleeve types will give you additional bonuses for a spin, while others give you a bonus for distance. As with skill points, sleeves allow you to modify your style of play for each round.

Overall, I found this new release of the 2K golf series a lot of fun to play. The new features add complexity to the game and I felt more engaged than I did playing PGA Tour 2K21. PGA Tour 2K23 is available now for PC, PlayStation 4, PlayStation 5, Xbox One, and Xbox Series X/S. 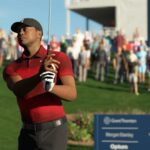