There are not many viable competitors to Mario Kart, so when one like Nickelodeon Kart Racers 3 comes along it is worth checking out. While Mario Kart is not likely to lose its crown anytime soon, Nickelodeon Kart Racers 3 does provide an acceptable alternative if you do not have a Nintendo system available. With a massive roster spanning several decades of classic cartoon characters there is likely something for you here. After you get everything unlocked, anyway.

The amount of content in Nickelodeon Kart Racers 3 is deceptive at first. You will have a handful of characters available, and each will have only a few ways to customize their vehicles. However, you will start unlocking the remaining members of the 40-odd character cast quickly. Whether Nicktoons were new when you were a child, or if you grew up with some of the later shows, there’s a good chance there’s something for you here. Personally, it was the Teenage Mutant Ninja Turtles and Avatar The Last Airbender characters that I was the most eager to unlock, but everyone will have their own priorities. Some of the characters to unlock are duplicates, though, so it can be a bit misleading. For instance, there are two different SpongeBob SquarePants to unlock. In addition to that are kart modifications, skins, and so on. So long as you enjoy the game there will be plenty to keep you coming back for more. However, this may work against the game because it can definitely feel like a grind long before you get to the end of the roster.

The actual gameplay itself will be familiar to anyone who has played Mario Kart at any point, but it has a few of its own touches. The most obvious is the inclusion of a “pit crew” character that gives you a special ability to use while you race. These expand the game’s roster by another 90 or so characters and allow you to use characters who would otherwise not appear at all. The powers granted by these pit characters are in addition to the random powers you will pick up off the field while racing. There are also several different modes available right out of the gate, which helps keep things from getting stale — aside from that unlock grind I mentioned before. Importantly, it has a four-player local play, which I think should be mandatory for this style of racer. There is also twelve-player online racing, but good luck finding matches.

Importantly, the controls for Nickelodeon Kart Racers 3 are well-tuned and familiar. These feel just as tight as Mario Kart‘s controls, and I cannot complain about them. Some of the tracks are upgrades over previous games in this series, however, I have not played them so I cannot tell you in what ways they have been changed. I can say that every track I played on was interesting both visually and from a racing perspective. I did find a few that I would like to never race on again, but I think that’s inevitable with the number of tracks involved. The ratio between great, good, and bad tracks is favorable overall.

The rest of the game’s presentation is good overall, although there are some blips. With so many recognizable characters I think voice acting is an important part of this game, and thankfully this holds up well. I think most of the characters got their original voice actors back, and those that didn’t have replacements who were up to the task. Similarly, the background music on each track evokes the series that it originates from. On the downside, I found that on the Xbox Series X the framerate wasn’t as solid as I would have liked, with some tracks being more prone to slow down than others. It is not a game-breaking problem, but it is noticeable when it crops up, and it can be frustrating in a game where split-second decisions are important.

The biggest problem with the game is unfortunately that the AI is inconsistent. If you are playing against humans — if you can find any in the barren wasteland of the online community — it’s not a problem. The AI, though, is super easy to get past, until you are in first place. Once you get to the top the rubber banding begins, and it gets frustrating fast. I consistently was blowing away the vast majority of the field, and yet was completely unable to maintain a lead over the final racer. I don’t mind losing, but I want it to be because the game is challenging, not because it is cheating.

Overall I enjoyed my time with Nickelodeon Kart Racers 3 Slime Speedway, but it was frequently a game I had to force myself to sit down to play. Despite that, I do actually think it’s worth giving a shot if you like the genre. The AI rubber banding is wildly annoying, but there are so many different modes in the game it isn’t as big an issue as it could be. If you have friends and family you can play with, either at home or online, then you should have a lot of fun with this. If you don’t have access to Mario Kart, or you have burned out on that and want to try something new, I think Nickelodeon Kart Racers 3 Slime Speedway is the next best alternative. And it is close enough to the pinnacle that the inevitable sequel could indeed have a shot at dethroning the king, which is saying something. 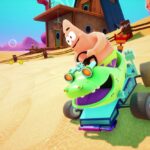