It has been a while since I have played a rogue-lite game as fun as Gunfire Reborn. This new, colorful first-person shooter has taken many elements of past titles and refined them into a satisfying experience. Modern rogue-lite games frequently rely on marginal gains made over multiple runs, but Gunfire Reborn was generous in the early- and mid-games rewards. This allowed the game to get its hooks in me, so when it did eventually hit a plateau I already felt invested in the game. It helps that the guns and abilities are fun right from the beginning, too.

Gunfire Reborn starts simply enough, with you descending into a procedurally-generated dungeon in the quest for loot and treasure. You will quickly start accumulating skills, perks, and weapons, and for the most part, you will feel more powerful with every gain. Some of these unlocks come through completing gameplay challenges, and some from luck and chance. Additionally, like Hades, many of the things you get in each run will come with choices so you can tailor your skills to your play style. This helps blunt the annoying randomness of the genre. Being a rogue-lite these skills go away when you are defeated and kicked back to the main hub, but you will also gather currency that gives you permanent boosts.

The cost of early upgrades is cheap enough that you will start getting significant boosts early on, and the pricing does scale well to match your skill level. It will take a long time to get everything unlocked, but there is a constant feeling of progression until the final upgrade tiers. The one area that could do with some improvements is that only one class is available from the beginning, and it takes a while to get your second. Adding in some base-level classes for beginners to choose from would be welcome, especially since there is a sizeable roster in the game.

What originally drew me to Gunfire Reborn was the bright and colorful aesthetic of the video game. This is a vibrant game that is pleasant to look at without sacrificing performance. The polygonal visuals of the characters and enemies resemble a style choice and honestly look good most of the time. I doubt it will show up on any “best graphics” lists at the end of the year, but it will stick with you. The early levels feel a bit repetitive graphically, but after you clear the first boss (which only took me two tries) it opens up considerably. On the Xbox Series X, I never encountered any serious graphical issues and the game played smoothly the whole time. If there is an issue with the presentation it is that getting the interaction button to appear over chests or loot drops can be extremely finicky and hard to get to appear at times. On the other hand, the audio is rather uninspired. I couldn’t point to any specific problems with it, but nothing stands out either. This applies to every facet from gun sounds to music. It just disappears into the background and does not stick with you at all.

As with many first-person shooters, Gunfire Reborn can be enjoyed entirely solo but is best played with friends. Up to four players can join together and go adventuring. Unfortunately, the console version does not have a split-screen option at this time, and crossplay between the Xbox and Steam versions does not seem to be implemented. You can play the Xbox version with the Windows Store version — and the game is coming to Xbox Game Pass for both — but I would expect that the PlayStation 5 and Switch versions will likewise be split-off. Hopefully, it will eventually become possible, but as near as I can tell nothing has been definitively stated by the developers on future cross-play plans. I think the lack of both local split-screen and cross-platform play is an unfortunate roadblock for an otherwise excellent game. I recognize that cross-platform functionality is normally restricted by the console manufacturers themselves, but it always baffles me that this is still an issue in the 2020s.

Rogue-lite games always come with a certain amount of luck and frustration, and Gunfire Reborn is no exception. However, in all the hours I put into it I rarely felt that I had a run where the random rolls out and out prevented me from advancing. You get so many bonuses in each run that even if a few don’t fit your style you will get others that do. It is one of the more satisfying rogue-lite games I have played in a long time, and while the story is basically non-existent I did keep finding reasons to come back and play. If you have Xbox Game Pass this is an easy recommendation to try out. If the price for the Xbox version keeps parity with the Steam version at $19.99 then I consider it more than worth the price. If you are looking for a fun first-person shooter rogue-lite, this is absolutely one to play. 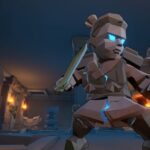