Three years ago Monster Hunter World was my introduction to the beloved action series, and I ended up sinking around three hundred hours into it. Monster Hunter Rise is the next iteration in the series and returns it to Nintendo’s console. Rise brings many of the gameplay enhancements designed for World which made the notoriously dense series much more accessible while adding in some new ones. The game embraces some of the quirks of the older titles, too, and creates an interesting mash-up of modern gameplay and legacy aesthetics.

Monster Hunter Rise from Capcom hits you right out of the gate with its meticulously designed town and hub area, which draws much more obviously from a classic Japanese aesthetic than World did. The colors pop all around and character designs have much more flair to them. This makes up for the obvious step backwards in overall graphics quality that was inevitable by moving to the Switch from the Xbox One and PlayStation 4, despite being the newer game. We will have to see if the announced PC version of the game will feature graphical upgrades when that is released later this year. The game does not skimp on performance, though, and I rarely encountered issues. I am happy to accept a loss in graphical quality so long as it means that I won’t get eaten by monsters due to frame rate drops. I am monster food often enough as it is without needing the game to handicap me further.

The most important aspect of any Monster Hunter game is fluid and kinetic combat. Thankfully, Rise provides a satisfying experience right away. If you have previous experience with the series, especially if you played World, the weapons will feel exactly as you remember them, though you may need to tinker with the control settings a bit. They also took the clutch claw introduced in the Iceborne expansion for World and improved on it to give us the wirebug, which makes terrain traversal even faster than before. Add on to that the other excellent addition to the series, your rideable Palamute companion, and getting around the various maps is a relatively painless process. This is particularly good since your character feels a bit weightier this time around, with dodging and movement being a bit slower than I was used to. It took me a bit to adjust to this, but it wasn’t long before my hunter was back to all sorts of gravity-defying acrobatics.

Your hunter may be the protagonist of Monster Hunter Rise, but the stars are obviously the monsters themselves. Rise ships with just about 35 major monsters (with a few extra variations), which is a nice bump up from the 30ish World launched with, though it added many more between free updates and the Iceborne expansion. It is safe to assume Rise will also receive more monsters over time. With my own experience only coming from World a lot of the monsters I encountered were new to me, but a handful of them were familiar, including my old nemesis: Anjanath. My understanding is that of the ones I didn’t recognize many are series regulars returning after skipping World, but there are new faces in the mix, too.

As you would expect the early monsters you encounter are relative pushovers, with you eventually hitting a wall (hi again, Anjanath!) that will force you to farm lesser monsters. And then you get to farm that monster to go after the next monster, and so on. If you have played a Monster Hunter game before then you know the deal with the grind already. If you haven’t played a Monster Hunter game then you should be aware that the gameplay loop is designed around the grind, and you will spend literal hours hunting the same monster over and over for a rare drop to give you that boost you need to clear the next hurdle. You can clear the story without spending too much time spent on pure grinding, especially if you have friends to play with, but Monster Hunter Rise is definitively in the category of games that truly begins when the story ends. Generally speaking, that isn’t the type of game I enjoy — I prefer a defined ending to a game — so it speaks to how much fun the actual hunts are that I’m willing to dive into the post-game grind so happily.

The story itself is nothing particularly worthy of spending time on. It exists simply as a framework to get you from monster to monster, and it is fully aware of that. This isn’t to say it doesn’t have character and personality, but even now, with the game less than a week old, I could barely think of any story points worth mentioning at all. As a counterpoint, I grew fond of several of the characters I worked alongside, and several of the monster introduction cutscenes are truly epic. If there is one thing this game does well from a narrative perspective, it is to hammer home just how amazing many of these monsters are. The fact that even playing in handheld mode I got goosebumps during some of the cutscenes speaks volumes. This is a game that knows what its strengths are, and it plays to them.

The last thing worth mentioning is that Monster Hunter Rise, like its predecessors, is clearly designed as a multiplayer experience. You certainly can play solo, and the game gives you several tools designed for this like your customizable palico and palamute, but you’ll get more out of it with a team. And this is where the move to the Nintendo Switch works against the game. Nintendo has well earned its reputation as being a bit backward when it comes to online multiplayer experiences, and that can be felt here. It is not nearly as bad as many Nintendo games — including several first-party entries — but you can expect to encounter issues and odd design decisions. Given that Monster Hunter World already didn’t have the most intuitive party system you can see how things can get frustrating in Rise. There was nothing that made me want to throw my controller, but I still hope that they will roll out improvements as the game develops.

Monster Hunter Rise is an excellent addition to the Monster Hunter series, and fans will want to jump in if they haven’t already. If you have never played a Monster Hunter game before you may want to try out Monster Hunter World first, as the two games are close enough in style to let you know if you like the gameplay loop (World is also included in Game Pass if you have an Xbox). If you’re a Monster Hunter fan, but don’t own a Switch you can wait to see how the upcoming PC port is received before deciding which route to go. As for me, I’m looking forward to really sinking my teeth into Rise and being the best hunter I can be. 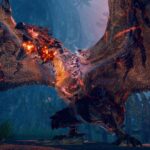