There are few games in this world that have titles that describe their content as well as Monster Hunter World from Capcom.  Sure there is a makeshift story pertaining to giant elder monsters who journey across the sea every few decades, and it is actually not bad for what it is.  But the real focus of the game is hunting monsters so you can craft their various hides, claws, teeth, and so on into better gear for yourself so you can hunt bigger monsters and continue the cycle.  This game is all about the loot grind, and it is exceptionally good at it.  I think it is important to note upfront that if you are not interested in the infamous gear treadmill popularized by MMOs then you should stay far away from this game.  No matter how positive the reviews or how much people rave about it, the core gameplay hinges entirely on the grind and there is no getting around that.  However, if you do enjoy that grind (as I do), then you will find a refined, well polished treadmill waiting for you.

Monster Hunter World is a game that starts off deceptively simple.  You are given a starter version of every weapon type available right from the beginning, and highly encouraged to experiment with all of them.  The early monsters, even the first few bosses, are simple and can be taken down with weapons you have not upgraded or practiced with at all.  However, you will quickly start to encounter boss monsters that require actual strategy and planning.  Most monsters have distinct strengths and weaknesses, but that is only the beginning of the planning.

The core experience of Monster Hunter World is in the multiplayer.  You can certainly play it solo, and for story missions you will have to up to a certain point for some bizarre reason, but the game shines in group play.  Coordinating with one to three other hunters can be exhilarating, and often comes with better rewards.  Obviously playing with friends is your best bet, but I found random team-ups to normally be perfectly fine.  If you do want to play solo or with just a single friend then you can choose to have your “Palico” join in the fun.  This is a custom designed cat that walks on two legs, wears armor of your choice and wields a weapon.

For a game with such a simple concept, Monster Hunter World offers a surprisingly robust amount of content.  You will be inundated with side quests, fetch quests and research missions right from the beginning.  There is always something to do when the grind gets to be too much and you need some variety.  This is also a game where you will quickly amass an inventory of assorted weapons, traps and armors, and you will use all of them.  You will need to craft armor with certain defensive properties for certain fights, and then upgrade them as more advanced fights become available.  There is no single piece of gear in this game that will get you out of every, or even most, situation.

Graphically Monster Hunter World is a bit mixed.  On the surface it is a good looking game with a massive attention to detail, but once you dig in you will notice the flaws in the system.  The first, and most obvious, is that the character creation (which is quite deep, actually) does not give you an accurate representation of what your character will look like in the game itself.  This is doubly disappointing once you realize your character will be appearing in a lot of cutscenes, and that subtle change from what you expected to what you got is annoying.  Additionally, the game seems to have decided that dark colors are simply not allowed.  Even in the darkest caves the color palette never moves beyond a medium-dark gray, and true black is non-existent.  On a more positive note the frame rate is fairly steady, although not rock solid.  This is ultimately an extremely good looking game with some odd quirks, and an unusual fondness for bloom filters.

All told Monster Hunter World is an easy recommendation to anyone who loves to hunt for new gear at every turn.  It is a simple system, but it is refined in a way that almost no other game of this type can match.  If that type of game does not appeal to you then Monster Hunter World will not change your mind at all.  This is a game with only a few tricks, but they are tricks that are really, really well executed.  I can easily envision myself putting hundreds of hours into this game (I’m already well on my way), and I will love every minute of it. 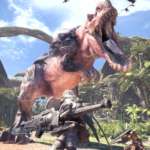