Ubisoft’s Far Cry series has gone from being a glorified tech demo to one of the top single-player first-person shooter experiences. Starting with the delightfully insane Vaas in Far Cry 3 the series has defined itself by its villains, and Far Cry 6 is no exception. This time around our villain, Anton Castillo, is voiced by the legendary Giancarlo Esposito of Breaking Bad fame (among others). Sadly, despite the heavy marketing around his inclusion, Mr. Esposito takes a back seat through most of the game after a rather fiery and explosive debut. Once the game does reintroduce Anton back as a direct threat the narrative improves vastly, even while it occasionally goes off the rails into strange territory. That’s nothing new for the Far Cry series, though, and the strange, often seemingly arbitrary, tangents are just part of the ride.

As far as the actual gameplay goes, Far Cry 6 offers a lot to dive into, just not a whole lot of it is new. Most of the side activities in the games are variants of what you’ve done in previous games, if not Far Cry specifically then at least other games in the Ubisoft catalog. The long list of side activities includes, but is not restricted to fishing, racing, destroying anti-aircraft emplacements, treasure hunts, capturing checkpoints, capturing fortresses, co-op missions, managing squad missions, and building up your encampment. Oh, and there are all sorts of items to find pretty much everywhere. Quite frankly, Far Cry 6 launches with more content upfront than most modern games. The planned DLC schedule is fairly extensive, too, so it’s clear that Ubisoft is hoping you’ll be playing Far Cry 6 for a while.

All the content in the world doesn’t save a game if it isn’t fun, though, and thankfully Far Cry 6 comes through. The gunplay has been tightened up even more than it was in Far Cry 5, and it is a satisfying experience throughout. On the other hand, vehicles still control questionably, especially when it comes to tight turns. I ended up using horses for transportation more often than cars simply because they handled better. Unfortunately, that’s not the only major system that could use some post-launch tweaking. The AI in Far Cry 6 is, in a word, stupid. I’ve played many games with idiotic AI, and the Far Cry AI somehow always seems to manage to make that list. The developers seem to have understood that, and compensated by making the bad guys bullet sponges, although headshots will kill most opponents in one or two hits. Sadly, it’s not just the enemy AI who suffer, as your amigos that accompany you will routinely get themselves killed for no apparent reason. For example, my trusty K-9 Boom Boom decided he wanted to fight a shark that was not bothering anyone while I fished nearby. The fight went precisely as you would expect.

The presentation in Far Cry 6 is well done all around. The voice actors of the core cast do a terrific job, and even most of the secondary characters come across well enough. The soundtrack was, admittedly, not to my taste, but it does fit the game and is well produced. There are still weird moments with repeated dialogue, or conversations getting cut-off by a world event only to pick up precisely where they left off once the event is over. I’m not sure how they would fix that since it is more of a concession to gaming tropes than a glitch, but it’s still awkward. Graphics and, in particular, fire animations have always been a highlight of the Far Cry series, and this entry is no exception. I never encountered significant frame rate issues or pop-in, but I did encounter several instances of NPCs vanishing just before they left my visual range. That’s not an issue I’m used to seeing in games, and it was strange to see it here.

Fary Cry 6 starts strong with an intense escape from Anton’s forces and then flounders a bit before picking up again once Anton re-enters the story. In my opinion, Giancarlo Esposito is at his best when he’s playing villains who don’t come off obviously villainous but his role as Anton is a bit more obvious, and yet he still nails it. Here he chews up the scenery and oozes evil charisma. You love to hate him, just not in the same way you do in Breaking Bad or The Mandalorian. It is thus disappointing that you will spend quite a few hours in the early part of the game without him to keep the plot going.

Compared to last year, Ubisoft’s holiday lineup is looking a little thin, but fortunately, Far Cry 6 will shoulder the load. There’s a lot of content packed into this game, and even if you stick almost exclusively to the story missions you’re still looking at an extensive time with the game. If you’re a series veteran you know what you’re in for, but if you’ve been drawn here by Giancarlo Esposito (and who could you blame you?) just know you’re in for a wild ride that alternates between a tense narrative that likes to live in the gray area, and some truly bonkers, off-the-wall weirdness that Far Cry likes to indulge in. Gamers looking for a good narrative-driven first-person shooter this holiday season should definitely have Far Cry 6 on their radar. 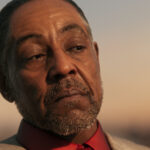