Watch Dogs Legion drops from Ubisoft this week, right smack dab in the “no man’s land” before new console releases. The upside here? No other games to compete with, and Legion will see next-gen updates for free for those who purchase. So, what about the game? Is it worthy of a binge play while you anxiously wait to see if your new Xbox or PlayStation pre-order actually arrives? In short, yes, but there’s a bit more that you’d like to know I’m sure.

The story of Watch Dogs Legion, which only borrows in part from the previous two entries, begins fantastically with DEDSEC being framed for terrorist attacks in future London by a mysterious “Zero Day” group. The most surprising thing to me during my time with the game was how good the story actually is. Not that Watch Dogs 2 was bad by any means, but it always just felt a bit too corny, which was a hard swing from the too serious nature of Watch Dogs 1. Legion fits perfectly in-between. There are still some corny aspects, but it also pushes a more serious tone of what can happen if tech, and tech companies go unchecked. The story is absolutely worth checking out.

The biggest new (and marketed) feature is the ability to essentially play as anyone in the game. When this feature was first shown it was hard to imagine it working well, but I’m glad to say it does. Initially, you chose one of about 12 characters to start the game with, and from there can recruit (and play as at any time) nearly anyone you see on the streets. This includes being able to use their special abilities (my construction worker could call in giant, rideable drones) and set a weapon and tech load-out for them. This means you can tackle missions in different ways depending on the character. It nearly (not quite, but nearly) feels Hitman-esqe, or, Hitman-Lite.

The hacking system is back in Watch Dogs Legion and is similar to the second game, with the ability to open gates, move vehicles, and more. The mission design is quite fun in Legion and reminds me more of Hitman and the recent Batman games than anything. Sneaking through locations and stealthily taking out enemies with fists or one of the various tech or shock weapons is fun and exciting when you clean an entire hideout without alerting anyone. Pairing this with the ability to recruit people with various skills ranging from faster hacking, to drone control, to things much crazier, makes each mission fun and replay-able.

Overall Watch Dogs Legion finally nails the initial concept Ubisoft was searching for. It’s not too serious, not too goofy, but (in a Goldilocks analogy) just right. The mission design paired with play-as-anyone ability makes you consider each gameplay scenario and “shop” for people to use based on skills needed, and this provides ultimate replay-ability to see just how many ways you can complete the mission.

The tech tree gives solid options to assist in these missions and the character customization means you can literally build an entire DEDSEC team and design their own look. If you’re looking for a game, with a free next-gen upgrade, that you can play for the next few weeks while launch approaches and passes, this is a great game for it. The story is fantastic, the world is solid, and there is plenty do keep you busy while praying you pre-order for new consoles doesn’t get canceled or delayed. 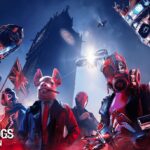