Often times with sequels from independent developers like Double Damage Games you get a marginal upgrade over the original game with a few new features and not much else.  The newly released Rebel Galaxy Outlaw does take a lot from 2015’s Rebel Galaxy, but it is largely an entirely new game.  The original game featured hulking, capital ship style combat reminiscent of naval combat in recent Assassins Creed games — just in space.  Even though it was in space the gameplay was mostly on a two-dimensional plane.  By contrast, Rebel Galaxy Outlaw gives you a full range of motion and direct control like in TIE Fighter and Freespace.  Many of the original game’s features like trading and mercenary contracts make the jump intact, but the change to the core gameplay loop makes all the difference.

I was a big fan of Rebel Galaxy and was a little disappointed to learn of the change to the gameplay when Rebel Galaxy Outlaw was first announced.  While I was raised on space sims like X-Wing and have a deep fondness for the genre, the unique take that Rebel Galaxy had was going to be missed.  Thankfully, the core gameplay is so fun and exhilarating that it validates the changes.  The controls are slick and responsive, and the ship combat is deeply satisfying.  The game is also designed around getting you into the action quickly.  You can jump virtually anywhere in this game in a moment — provided you aren’t surrounded by hostiles.  The flipside to this is that you do miss out on some of the stunning vistas and the sense of exploration the original game had.

Rebel Galaxy Outlaw is not solely focused on combat, though it can be if you want it to.  There is also a basic trading economy where you can pick up materials from space stations and try to sell them for a profit at other stations.  There is also a mission board at every station, and it’s pretty evenly split between combat patrols and space trucking assignments.  The trading is nowhere near as in-depth as games like the X series or Eve Online, but it’s solid enough that you can play the entire game without engaging in optional combat if you want.  For myself, I found the combat so enjoyable that I actively sought out combat assignments whenever I could, but you can play it differently if you want.

Many of the features in this game are aimed at casual players, but that doesn’t mean it is easy or devoid of value for genre veterans.  The most important addition is the ability to hold a single button to track a targeted enemy.  One of the key complaints you often hear about this genre of game is that they can turn into games of flying in circles with an enemy.  This little feature assists with that so you can get down to the important task of shooting them down.  The feature is entirely optional and can be turned off, although it seems only when you first start the game.  If you start with it on and decide you want it off, or vice versa, you’ll have to start over unless that option gets patched in.

Aside from that oversight, Rebel Galaxy Outlaw is pretty forgiving in terms of controls and choices.  You can rebind anything and everything.  The game offers keyboard and mouse support, but of the available options that is the least efficient.  A modern gamepad is a great choice for most gamers, but for flight sim fans who have splurged on a nice HOTAS joystick that’s the way to go.  My Saitek X52, which has been in mothballs for a long time now, was brought out for testing and it felt excellent for this game.  If you choose to go with a gamepad you won’t be disappointed, and the game does feature button prompts for both Xbox and PlayStation controllers (the latter of which you have to toggle in the settings, but it is there).

The bottom line is that Rebel Galaxy Outlaw improves on its predecessor while losing only a few features along the way.  There is a balance between convenience and function, and there are times that Rebel Galaxy Outlaw misses that mark.  However, the few stumbles the game makes are nothing compared to the improvements.  The game looks good all around and is quite simply a blast to play.  It cuts away a lot of the genre’s more tedious bits — at the expense of some depth — in favor of a game that gets you into the action right away.

A sticking point for some PC gamers is going to be the game’s one-year exclusivity to the Epic game store.  I can’t tell you whether or not this is a game worth switching to Epic for, but I can say I have full confidence in the upcoming ports to PlayStation 4 and Nintendo Switch (an Xbox One port has not been announced, but the creator has expressed interest in pursuing it for later release).  If it being on Epic doesn’t bother you then I can heartily recommend this game to anyone who has any interest in the space simulator genre.  Even to players who prefer a more in-depth experience like Eve Online or X4: Foundations I think you will find that the game’s get-in-and-play approach is refreshing.  Rebel Galaxy Outlaw is an excellent entry into its genre and one you should definitely give a shot. 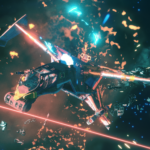