INSIDE is the latest 2D sidescroller from Playdead, the company that brought us LIMBO in 2010. INSIDE is in many ways much like its predecessor. So if you’ve played the first you’ll feel right at home here. Controls are identical – left, right, down and up (also jump). The new game features the same minimalist vibe in look and audio. Both games focus on a single protagonist set against an unrelenting and dangerous world, but INSIDE is not a clone of LIMBO. Differences abound and it’s those differences that both make the game intriguing and hurt the game in the end. 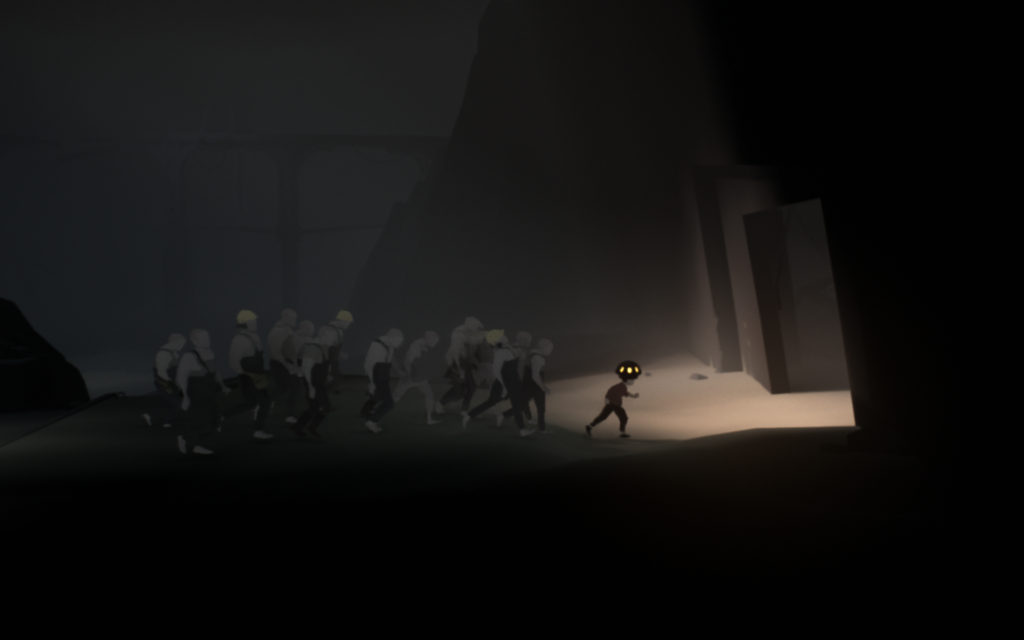 The first thing you’ll notice when the game begins in the extended color palette. The world now includes shades of red and blue. But this is not a cheerful title and color is used here to increase the gloom, not lighten it. All the color we get is muted and dark. It depresses the world around it. Everything, even daylight, is high contrast and much of the game takes place in the shadows. There is little hope here. Martin Stig Andersen once again handles the soundtrack, but musical cues are spread sparingly throughout. The majority of the game is sounds echoing the cavernous vistas and office spaces. Yes, office spaces! The world you enter is now inhabited, but few of those you meet are friendly. 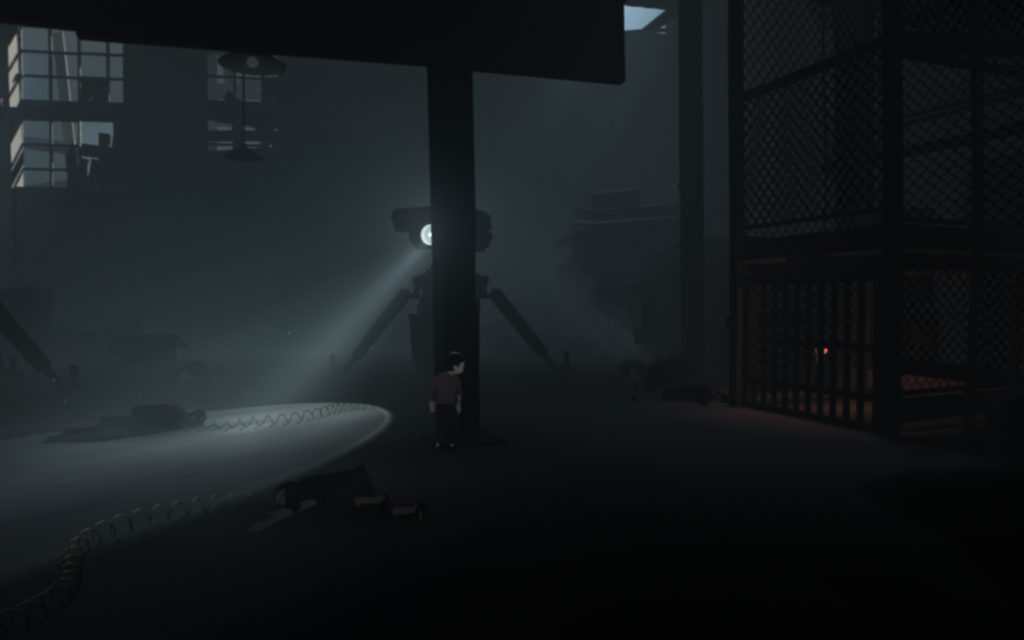 INSIDE is essentially an endless series of puzzles. You’ll come across a new one every minute or two and though they vary from exceedingly simple to moderately complex there’s nothing here on the difficultly level of LIMBO. Most puzzles are along the lines of either hitting a switch or figuring out how to access said switch. You will die significantly less in INSIDE. Most puzzles can be solved with observation alone. Those that take a bit more figuring often allow you multiple attempts. There are passages that are timed and your continued death is assured, but those are much fewer here. The change is a welcome one as frustration rarely boils over. 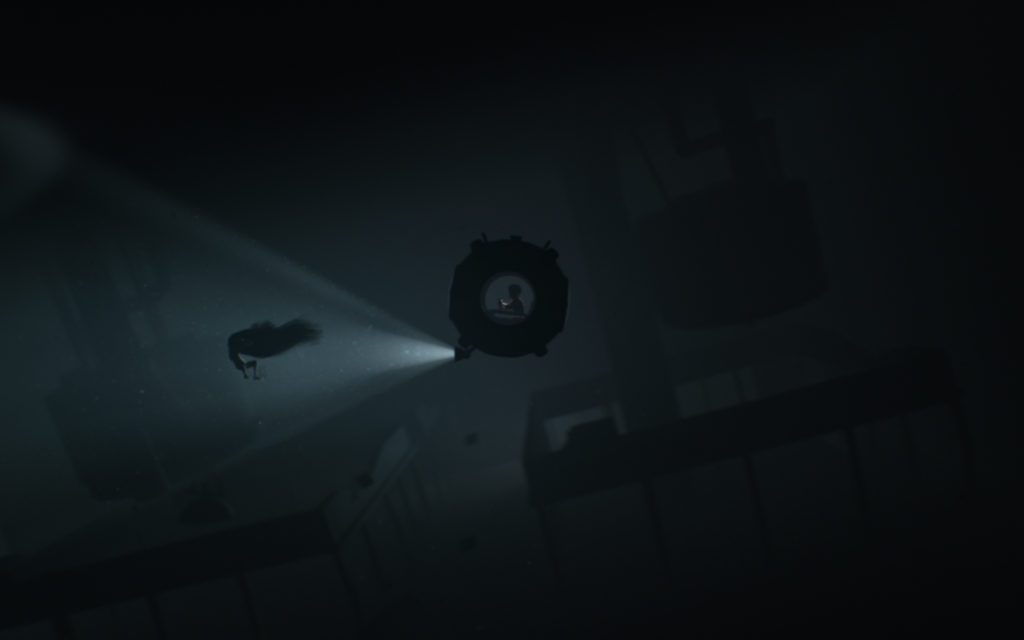 Playing through you can’t help but wonder where or when this is. Is this a future vision of our own world? Are its denizens our progeny? If so, what went wrong? There are hints that this is a future that we’re bringing on ourselves. Some type of plague has ravaged the world – dead livestock abound in the early chapters. A sinister regime seems to rule, judging by the enemies that chase you down and the experiments performed upon possibly living subjects. There are seeming remnants below the water of a forgotten past – huge machines and shopping malls.
If the game has a major failing, it’s the lack of a coherent story or narrative. The world you must pass through is so fascinating, begging for endless exploration, that the questions begin to overwhelm. I wanted to know more about the people ruling here and more importantly those who have been enslaved. Are these humans? Were they at one time?

Throughout the game you’ll find brainless slaves, who seem to feel no pain and whose minds you can control when the need arises. You’ll come across them alone, unmoving, with no desires or personalities, seemingly forgotten after their usefulness came to an end. A metaphor perhaps for the working class now shrinking in our economy, but in the game just another enigma. 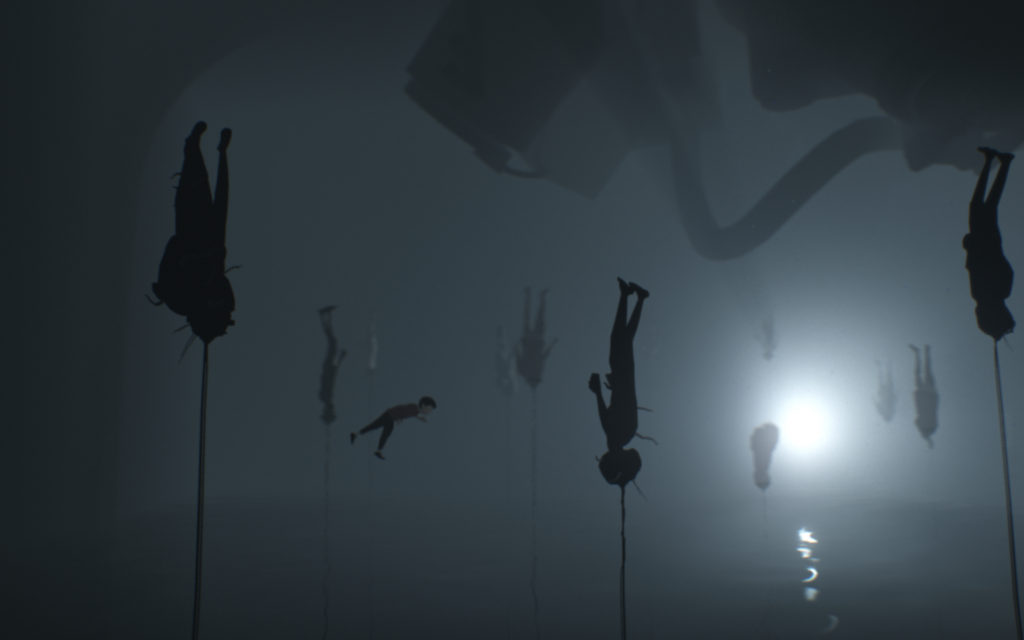 Among the most glaring oversights is the lack of a goal for our plucky, red-shirted protagonist. Where is he going (other than to the right)? Why has he entered this world? What does he need to accomplish? He has put himself into constant danger, but to what end? It’s unfortunate that as the game comes to a close, as fascinating as it has been to peak into every dark corner, there is no closure and seemingly no point. As the game switches from disquieting to bizarre and finally to grotesque it’s sure to entertain, but with no driving force, no punchline, it leaves you only confused and disappointed.

LIMBO didn’t have a strong narrative thrust, but there was enough of an overarching goal to move you forward in your quest. A boy enters LIMBO to save his sister – that’s we’re given and all we need. Here you won’t even find that much.

Overall, I rate the game above average. The art direction and immersion are excellent. Though I can’t say I’d want to live in this Hell, I wanted to know so much more about it. The lack of story is what really dings the title for me. I’d recommend INSIDE, but not as highly as its predecessor.