What is there to say about Buckaroo Banzai (1984) which stars Peter Weller and John Lithgow? It’s polarizing, for one. It’s a love it or hate it film. It’s a cult classic seemingly designed for a niche of movie goers who’d appreciate the serialized feel of the project without having been previously let in on the joke. It’s totally a product of its era. 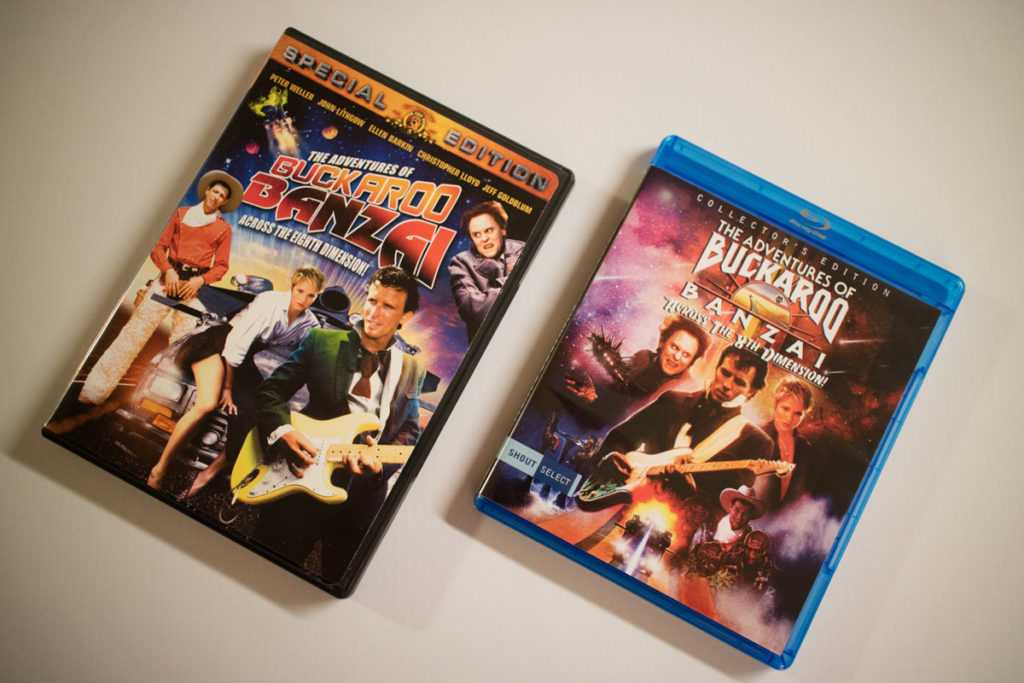 I am happy to count myself among the small (but growing) segment of people that can say they love it. Introduced to this title late one night on Showtime, it immediately struck a chord and I watched fascinated for the complete running time. Not being able to get it out of my head I had to track it down, watch it again, research it, find out more about it. Back in the early days of the Internet this wasn’t as easy as it sounds.

Thirty Two years after Buckaroo and his hard-rocking Hong Kong Cavaliers hit the silver screen Shout! Factory has released it onto Blu-ray as the first title in its new Shout Select series. This quality of the new transfer is jaw-dropping. As the owner of the previous VHS incarnation and more current DVD release I am shocked at the improvement in the transfer. I have seen a lot of transfers of more recent and higher budget titles that didn’t look this good. The opening title cards look like they were shot just yesterday. They are pristine. There is little grain apparent anywhere during the film, despite how dark some scenes get. Seriously, I can’t rave enough about how beautiful the movie looks.

In addition to the movie there is a fair amount of extras, though many of them are carry overs. The biggest and best of the new extras is a feature length documentary, Into The 8th Dimension, which is actually 25 minutes longer than the movie itself. The producers got most of the original cast, big and small names alike, to sit down and reminisce about the good old days. The only names missing are Jeff Goldblum and Ellen Barkin. It’s a shame they’re not included, but what’s here is so much fun, it was a pleasure to sit through. The cast and crew all seem to have absolutely loved the time spent on this motion picture. Though there are a few regrets – mostly from W.D. Richter about his struggles with Sherwood Productions – everyone has a good story to tell and seem to be only too eager, even to this day, to be involved with any potential sequels. That’s a pretty rare thing.

There’s also a new commentary track by Michael and Denise Okuda. The true geeks reading this will instantly recognize their names from Star Trek fame. They have geek cred to spare and you can tell by listening they are big fans. The track is a bit quiet at points, but there’s a lot of good information included.

The majority, but not all, of the extras from the previous U.S. DVD release are included. The original commentary by W.D. Richter and Earl Mac Rauch is included here, but I still couldn’t sit through it. The “in-character” gag just never worked for me. The original 22 minute featurette (also in-character), alternate opening, deleted scenes, original trailer and the Jet Car trailer are all included once again. All the text features of the previous release are missing, however. It would be nice to know why – rights issues, lack of space, but other than Pinky Carruther‘s text commentary track, none are truly essential, but for completists, sorry you’ll have to keep the original.

So what we have here is a labor of love. Everyone involved seems to have put forth their best efforts to make this the ultimate release. Everything here is top notch and the Blue Blaze Irregular in me can’t help but give a big fangirl squeal! My top recommendation on the purchase of this title. Let nothing stop you from getting your copy. Now it’s time for me to sit back, pop the movie on again and crack a huge grin. Thanks, Shout!

“Remember, no matter where you go…there you are!”