The OlliOlli franchise from developers Roll7 finally gets a new entry after 7 years with OlliOlli World. The game features simple mechanics to make it accessible and fun and a stylish presentation to make it visually interesting. It manages the tricky balance between letting casual players have fun while letting people who want to dive in deep master some tricky bonuses. OlliOlli World is an excellent example of “just one more try” game loops, which occasionally veers into frustration, but not often enough to be off-putting.

The simplicity of the controls is OlliOlli World‘s biggest boon. You can play through the majority of the game using simple gestures on your left stick for the various tricks and the button designated for doing your pushes to gain speed. There are slightly more advanced tricks available if you want to try rolling the left stick in various moves reminiscent of fighting games, but you are not obligated to use them. In a nice gesture, all the combos are available right from the beginning, and you can use any of them before the tutorial gets to the point where it teaches you about them. The only place I ever had problems was making the jumps between rail grinds, and even as I got to the end of the game I would release too late frequently. It’s not a big issue, though, and one that can be figured out by practicing.

Surprisingly, OlliOlli World also has an impressive array of customization options for you. On the surface, you would think this doesn’t matter since your character will spend much of the game too small to notice details on, but you spend a decent amount of time in chat screens where you can see your character just fine. The customization is entirely cosmetic, and while much of it is locked in the beginning you will unlock them quickly. Naturally, some of the craziest designs are locked behind particularly hard challenges, but that just makes them feel more impressive when you earn them.

To complement your customization choices the art of OlliOlli World is vibrant and full of character. Importantly, it runs at a silky smooth 60 frames per second, which makes landing tricks that much easier. There are multiple worlds to explore as you progress through the game, and they all feel different and alive. You will be surprised to find some genuinely beautiful levels tucked into a game which, at first glance, appears to not be much of a graphics powerhouse.

The levels themselves are interesting and varied, which is another impressive feat in itself. There’s only a handful of obstacles and kinds of rails to grind, but the developers were always finding new ways to mix them up all the way to the end of the game. There are also alternative routes to find, and optional objectives to complete that will force you to play in different ways. What I find particularly interesting is that I felt satisfaction just completing the game, and not feeling that I was required to go back and do all the optional objectives only to justify the value of the game. In games like this, that is rare, and other games in the genre should take notes. In the end, I did go back and complete many optional objectives just because I wanted to, so it’s not like you won’t feel compelled to do them on their own merits. It just doesn’t feel like the game is making me do it.

You will crash a lot in OlliOlli World, but you will be entertained while doing so. I did feel frustration at times — mostly on optional levels which are clearly marked as higher difficulty runs — but for the most part that was overridden by a desire to conquer the obstacles in front of me. This is not as punishing as OlliOlli 2 was (or, at least, how I remember it being), and there is some good quality of life improvements on display here. All of which is to say, this is a good game for both newcomers to the series and veterans. The deceptively simple presentation will lure you in, and the style will keep you playing. This is a solid game and one that I would recommend most people keep an eye on. Now, I need to go see if I can pop 5 starfish balloons in a particularly tricky alternate path. 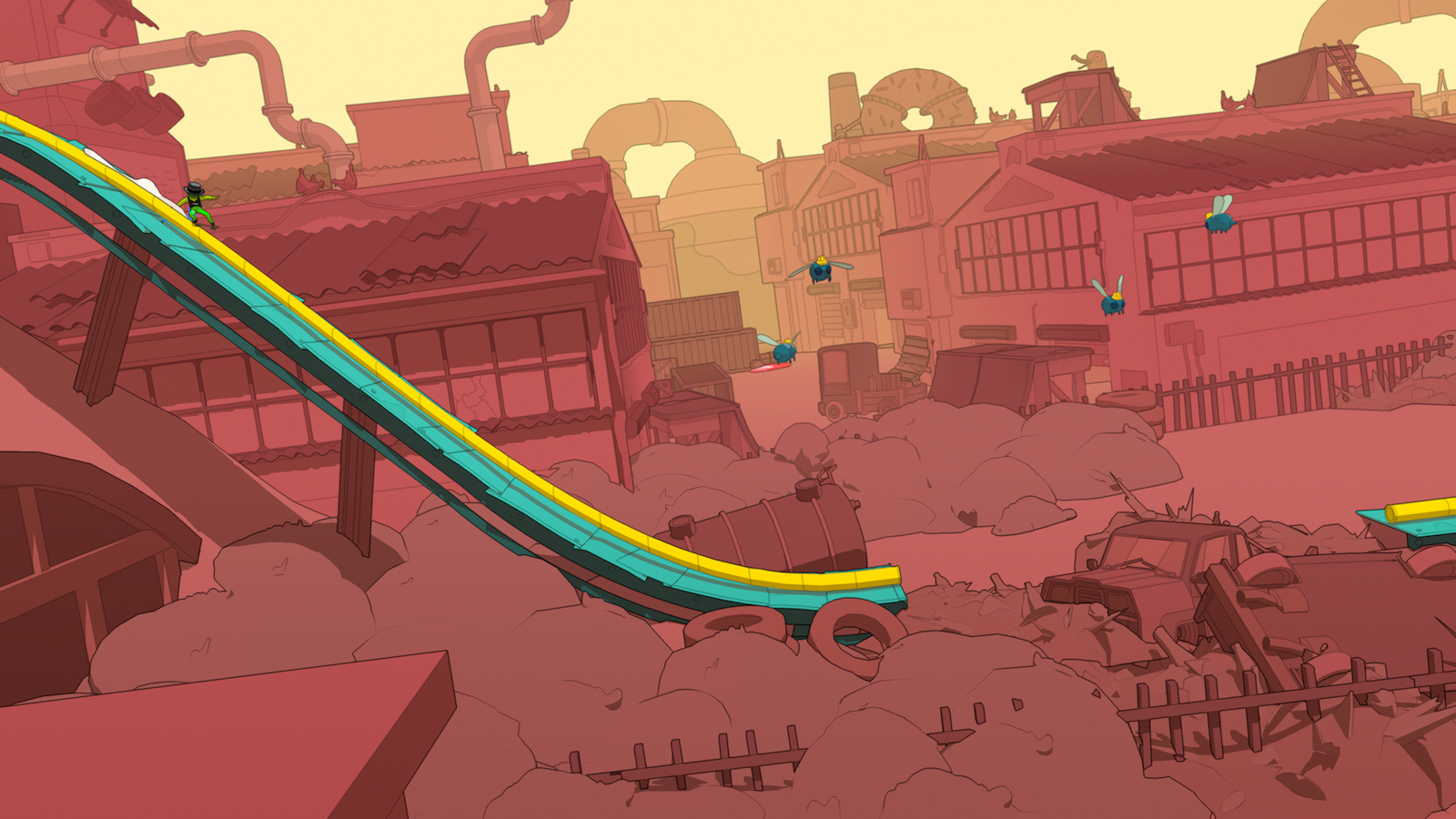