Though it’s yet another port of an award-winning game from a previous console cycle, Okami HD is as engaging today as it was when originally released in 2006 on the PlayStation 2. Developed by the now-defunct Clover Studio and published by Capcom, this action-adventure title puts players in the role of Amaterasu, a sun god in wolf form tasked with restoring the world after the evil monster Orochi brought it to its knees. With a similar gameplay style as the legendary Ocarina of Time and cell-shaded graphics not unlike Wind Waker, Okami HD blends the best parts of the Legend of Zelda series with Shinto lore to create a cult-classic game that has aged majestically.

One of the most memorable aspects of Okami HD is the implementation of the Celestial Brush, a magical tool that Amaterasu uses to perform miracles and defeat demonic beings. While the Celestial Brush felt the most natural to use in the game’s Nintendo Wii port, it’s still charming and (most importantly) fun in the current-gen Okami HD incarnation. The game’s rich backstory, puzzles, platforming, and combat combine to create a solid 40+ hour experience that should not be passed on. Even if this is your 2nd or 3rd time playing Okami, at a mere $20 MSRP, it’s an absolute steal worth every penny and moment of your time.

Looking like an oil painting come to life and playing like a certain Hero of Time (before he too was a wolf), Okami HD is one of those rare old games that stands the test of time. Though the game is still hampered by almost excessive exposition at the start of the game, it is instrumental in the world-building aspect of the story. The lack of voice-over acting is also a detriment to the game, but not so much so that it ruins the overall quality. Particularly if you’ve never roamed the countryside and taken down magical gods as Amaterasu before, Okami HD is a title you’ll thoroughly enjoy and remember for years to come. 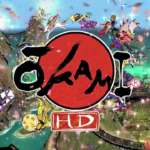