This is the last Mystery Science Theater 3000 DVD from Shout Factory and includes Diabolik , Girls Town, Satellite Dishes and The Amazing Transparent Man.

Well MiSTies, we’ve finally arrived at the end of the original show releases. As such, Mystery Science Theater 3000 Box Set 39 only contains three previously unreleased episodes. There are still a handful of episodes that haven’t been released on DVD, but it appears Shout Factory feels they’re not going to be able to negotiate for those licenses and has decided to throw in the towel. The press release states this set is the “almost certainly, probably definitely, maybe unquestionably final collection of never-before-released classic episodes”, hiding that it’s possible the rights to something unreleased might come about in the future. It’s entirely possible one of the last few holdouts will allow a film to be licensed. So this is probably the last box set, but that doesn’t mean there won’t be any future single releases (cross your fingers).

This set is an excellent send off for the series. You’ve got two excellent films and the disc Satellite Dishes, which compiles all the remaining host segments onto a single, long-running disc so you at least have those pieces if any of them were among your favorites.

Cheers to Shout Factory for all the box sets over the years, as we’re huge fans of the old show and the new show here at Coin-Op TV. With tears in our eyes and a lump in our throats, we say goodbye to one of our favorite series. (Cue the Love Theme from the Satellite of Love, please.) 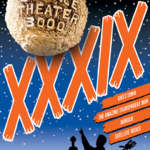 A pretty good title, maybe not the best to end the show on, but it’s got some good gags in it. The end sequence with the Satellite of Love falling back to Earth and Mike, Crow and Servo sitting around watching terrible movies just seems a bit of a downer ending for the series.

Showdown is a bittersweet piece featuring a lot of behind the scenes moments (taken from Last Dance) and interviews with several of the cast and crew of the final season. It’s a nice look at the final days and the memories of those involved.

Last Dance is more than an hour’s worth of behind the scenes video shot by Jim Mallon during MST3K’s final episode. There are a handful of short, impromptu interviews on set, but most of it shows the filming of host segments for the film Diabolik (then compared with inserted final cuts of the same host segments). It goes a bit long, but it’s fun seeing the bloopers and the retakes and the amount of work that goes into filming a single episode.

Great stuff! I forgot some of the memorable riffs that came from this episode (Gigaaaantor!). Servo probably has some of the best jokes in this one (he died, then I pushed him and he died, and he died and stuff), but they come non-stop from everyone and there’s no shortage of laughs at any point in the episode.

The interview with Charlie, who created the MST3K theme and Love Theme with Joel is interesting but feels like it’s a bit light on content. Still, any docs with cast and crew are always welcome.

Because Shout Factory is unable to get the rights for the last handful of titles to release officially, they’ve collected up the host segments from those episodes and tossed them all on one very long disc! In total, the segments are 2 hours, 41 minutes long. All the host segments from each episode are grouped one to its own chapter with a title card between them. There’s a lot of great material here and it’s too bad these possibly won’t see the light of day. Some of the bits won’t make a lot of sense if you don’t recall the specific film and their plot, but it’s still a lot of fun and was a great idea to release them all.

Host segments are from the following episodes:

Behind The Scream is a 20 minute documentary about the guy who makes the Ballyhoo documentaries on the Shout Factory/MST3K discs. It’s interesting to some degree to watch a short piece about the guy who makes the thing that I’ve found least interesting from the box set to box set. He definitely seems to have a passion for the little docs he makes, it’s just unfortunate the subject matter (schlock films, shlock production studios, etc) is so utterly uninteresting. I’ve always been curious if anyone is interested in an interview with the lead actress from a crappy film that would have probably been long forgotten if not for getting the MST3K treatment. Maybe people who watched these films in theaters in their original run will enjoy these, but I imagine fans of MST3K (the ones buy the movies simply to watch them being destroyed) see them as mere filler. Note: there is a bit of MST3K behind the scenes content toward the end of the piece.

It seems there always has to be one dud episode in each box set. This is that dud. The episode starts off pretty well with the inane The Days Of Our Years short but slows down with the movie, which is average at best.

There’s a Ballyhoo documentary on the movie, which was far too long and a theatrical trailer.